How to Divide in Excel and Google Sheets

Division is one of the most basic operations we have learned growing up. To most people, division is quite difficult. Thanks to Excel, division can now be performed with ease and accuracy.

How to divide in?

Division in Excel is easily done by using the forward slash “/”, which is the division symbol.

Suppose we want to divide any number (a) by another number (b).  The divide formula is 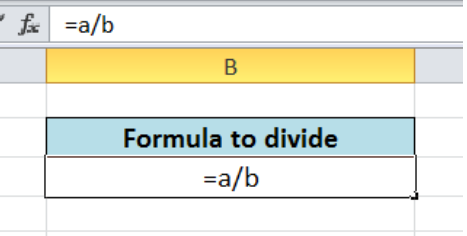 How to divide two numbers?

Dividing is very straightforward.  We enter the equal “=” sign to activate the formula function, then the numerator, followed by the forward slash “/” followed by the denominator.

where 8 is the numerator or dividend and 2 is the denominator or divisor.

How to divide two cells in?

The formula to divide cells uses  the cell references containing the values as the numerator and denominator.

When we want to divide cell B3 by cell C3, we enter the formula:

How to divide a column by a number?

We can also divide a column by a number.  When we want to divide column B by the number 2, we enter the formula

Where the numerator is a cell reference and the denominator is a number.

Figure 4.  Divide a column by a number in Excel

How to divide columns and Google sheets?

It is possible to perform division in several columns in as little time as possible.  In order to divide columns, we follow these steps:

The formula to divide columns in Google sheets is similar to Excel.  We simply use the cell references as the numerator and denominator in our division formula.

Is there a divide function?

Simply put, there is no function for the division operation.  In order to divide,, we have to use the division symbol in a formula.

There is, however, the QUOTIENT function which returns only the integer portion of any division, excluding the remainder.

We want to divide 10 by 3.  Using the QUOTIENT function, we enter the formula