Learn How to Use SUMIFS in Google Sheets

Google Sheets is similar to Excel and uses many of the same functions. Assuming you want to sum a range of values and have some criteria to either include or exclude, you can use the SUMIFS function.

How to Use SUMIFS in Google Sheets

If you want to learn how to use SUMIFS function in Google Sheets, you need to define both sum range from which are values summed and criteria ranges with criterions using the formula: =SUMIFS(sum_range, criteria_range1, criterion1, [criteria_range2, ...], [criterion2, ...]).

Some interesting and very useful examples will be covered in this tutorial with the main focus on SUMIFS function; it’s the difference between SUMIF, various ways of usage. After this tutorial, you will be able to sum values based on multiple range criteria or various logical conditions – which is the very good base for further creative Google Sheets problem-solving.

As we already mentioned above, the main difference between SUMIF and SUMIFS functions is the possibility to define multiple criteria based on which sum is calculated. In this topic, we will explain how the function works with “AND” logical operator when we need all criteria to be met.

Notice that we can add as much criteria ranges as we need. Let’s look at the example and explain functions parameters: 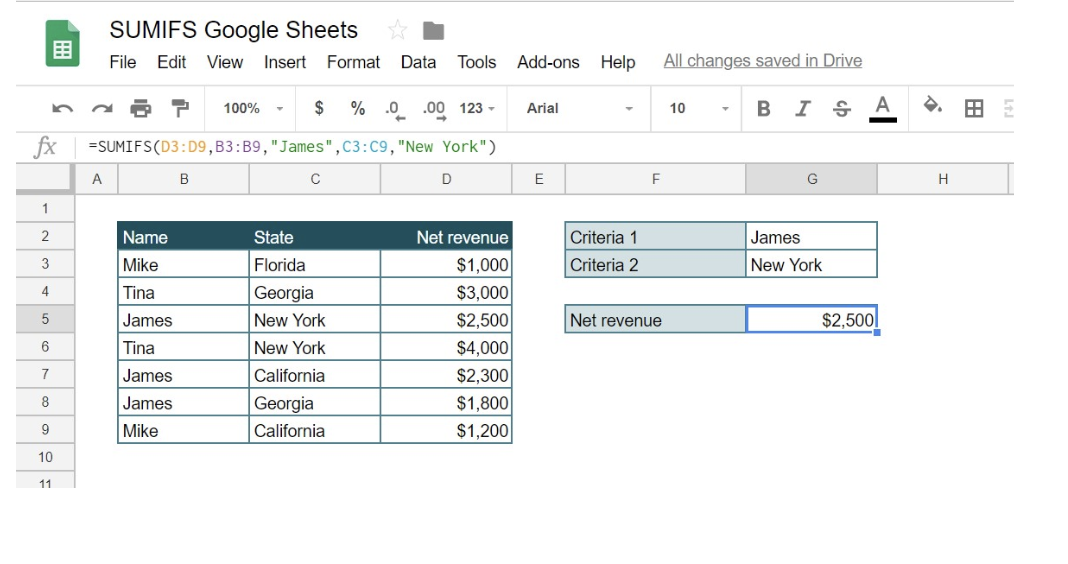 Explanation of the formula

The previous example consists of passing the certain parameter value to the function (like “James” or “New York”). However, if we want our function to be more dynamic, we can pass cells address to Criterion values, instead of values. In this case, our function would look like:

Doing like this, we can change the values of Criteria 1 and Criteria 2 in cells G2 and G3, and our function will be changed accordingly.

While working with SUMIFS function, there is often a need to use criteria on value fields or dates. With this data types we usually don’t want to filter just one value, but some range of values like: greater than, less than, between, equal to or not equal to.

In the following example, we will see how to include values comparison in SUMIFS function. Let’s say that we want to keep all criteria from the previous example (Name is Mike and State is New York), but also want to sum only those Net revenues that have the value greater than $1,000:

As you can see, we used the existing function and criteria for Name and State values and added third criteria range D3:D12 (“Net revenue” column). This time for criterion, we put “>1000”, which means that we want to sum up only values greater than $1000. Therefore only rows colored in green were included in sum, while the red row was not, because of the value $900.

Again, we can do this dynamically also:

In this case, the criterion is passed to function by putting logical operation (>) in quotations and concatenating it with an ampersand: “>”&G4.

Additional explanation in this topic is needed for summing values with criteria containing empty or non-blank cells. Let’s first look at the example where we want for one criterion to be always filled (non-blank cells):

In this case, we want column “Name” to have value James and for column “State” the only condition is not to be empty. As you can see we get the sum of all Net revenues for James from all States. For criterion “State” we put “<>” which means that we want non-blank cells.

On the other side, let’s look at the example where we want one of our criterion to be empty cell: 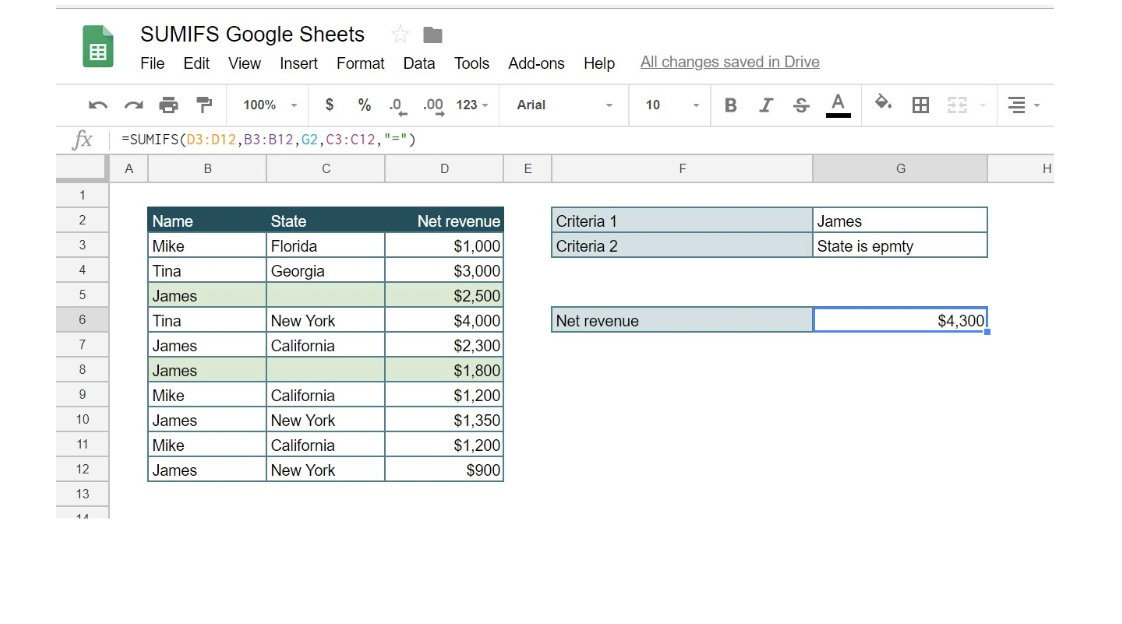 Again, we want column “Name” to have value James, but for column “State” we want to take only empty values. This time we get the sum of all Net revenues for James from State which has no filled cells. For criterion “State,” we put “=” which means that we want only blank cells.

SUMIFS Function with OR Criteria

If we use the SUMIFS function, each criterion in the formula has to be fulfilled in order to calculate formula result correctly. If even one criterion is not met, formula result will be zero, since this function follows AND logic. Question is how to summarize data based on multiple criteria, where either one condition has been met.

Logic is simple. At first, we calculate Net revenue that meets the first part of the condition (Mike, Florida), and then just add separately calculated Net revenue that meets second part of the condition (Mike, California). Instead of writing conditions as text under quotations, it’s always a better solution to link conditions to the cells in order to make reports more dynamic and suitable for changes.

Instead of using SUMIFS function, a more elegant solution is the combination of functions: SUMPRODUCT, ISNUMBER, and MATCH. Take a look in the example below, where the wanted output is James Net revenue in New York or California. Since formula syntax may be looking difficult, we will explain it step by step:

SUMPRODUCT functions in multiplying arrays in the formula above. The first array is defined with Condition “James”, and whenever the condition is met, formula result is TRUE, and when is not, the result is FALSE. Symbol — in front of the first array (B3:B9=G2) is translating Boolean values TRUE/FALSE into numeric 1/0. Array 1 after formula execution will look like {0,0,1,0,1,1,0}, applying number 1, when condition is met, and 0, when condition is not met in the defined range (Column Name).

After this step, formula ISNUMBER is translating array values into Boolean TRUE/FALSE, assigning TRUE if the array value is the number: {FALSE, FALSE, TRUE, TRUE, TRUE, FALSE, TRUE}. Symbol – is then translating Boolean values into 1/0 making array2 looks like: {0,0,1,1,1,0,1}. Now we have a clear array, where number 1 is assigned whenever the condition New York or California is met.

At the end, the function is multiplying all three arrays:

Still need some help with Excel formatting or have other questions about Excel? Connect with a live Excel expert here for some 1 on 1 help. Your first session is always free.

query function in google sheets
An Excelchat Expert solved this problem in 18 mins!

query function in google sheets
An Excelchat Expert solved this problem in 18 mins!

Your message must be at least 40 characters
Our professional experts are available now. Your privacy is guaranteed.
Trusted by people who work at